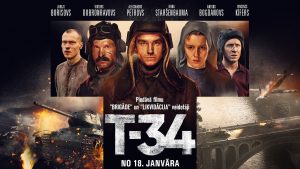 This 2019 Russian-made film has the best computer graphics I’ve ever seen in a tank movie. The shells are shown coming out of the cannons, rotating in space, and sometimes in stop-action. When a shell penetrates a tank, you see in slow-motion exactly how the damage occurs. Every shot is brilliantly carried out with loving detail.

The plot is a little fantastic (a captured Russian tank commander and crew being recruited by the Nazis for training purposes), but it is based on a true story from 1944. In any case it is far better as a story than tank flicks like “Fury.” No raping women or wanton killing of prisoners is required, nor are any of the tankers drug-crazed hippies. Not only is the T-34 a wonderful tank (many say the best all-round tank of WWII), the Russian commander uses superior tactics. The scenes showing the crew working together on wide screen in the cramped interior, with all the old-fashioned cranks and levers, and sometimes getting stunned by shell hits, or getting heads bloodied as the tank hits something or falls off a ledge are very realistic.  The roar of the engines and all sounds are superb. These are the kinds of effects and action shots I’ve always dreamt about for our tank movie “Patton’s Secret Mission.”  [A 5 part series coming soon on Netflix. Why not?]

T-34 was written and directed by Aleksey Sidorov, starring Alexander Petrov, and was funded by the Russian government. It is available on Amazon video.

Back to Best Tank Movies