Available for production. E-mail me.

In 2003 I had the opportunity to meet Harold Cohen in person as described in the My Heroes section.  It is one of the most visited pages on this website.

Harold handed over to me an unfinished, unpublished 130 page manuscript that he had written about his WWII experiences. With the consent of Marty Cohen and the Cohen family, we agreed a few years ago that we would collaborate on turning this story into a movie version.  The story was rather thin on dates and places, but when I studied it in detail I realized that every word was true, these were real happenings with real characters — even the words that were spoken in terms of dialogue.  When the Covid-19 pandemic constrained me to home living for most of the past year, I got to work on this new screenplay, which due to help from WWII expert friends, screenwriter friends, and professional reviewers is now finished.

It starts with the Arracourt tank battles, arguably the most exciting 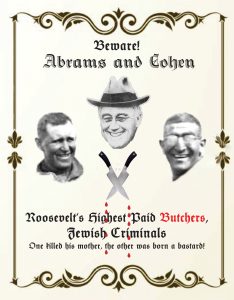 and successful of America’s tank battles in WWII. It chronicles the rise of Harold Cohen going from buck private to Lt. Col. in 2-1/2 years.  A man so near-sighted that he needed to sign a waiver in order to volunteer in the Army back in early 1942.  After boot camp, he attends OCS, and after starting out in the quartermaster corps, he gets into combat and by March, 1945, reaches the rank of Lt. Col.

Cohen’s relationship with the West Pointer and Patton’s star tank commander, Lt. Col. Abrams, begins in a very rocky scene with them exchanging curse words over the radio during a tense battle.  The relationship grows through success in battle together, and they become life-long best buddies.  By the end of the war, so famous are the victories of Abrams and Cohen that the Germans are circulating a poster calling them “Roosevelt’s Highest Paid Butchers.”  Shown here is my own English language version of this propaganda poster, while we comb the earth for a copy of the original.   The fact that Abrams is not Jewish was something he was happy to keep quiet.  Being feared by the Germans was exactly what they all wanted.

There are major tank battles in Ley, Juvelize, and Benzange-la-Petite that are still studied as classics of tank warfare. They move on to Guebling, the action covers the liberation of Bastogne, the capture of the bridge in Aschaffenburg as the pre-requisite to Patton’s Hammelburg raid.  Cohen was supposed to lead this raid, but due to hemorrhoids he checked into a field hospital and was captured by the 6th SS Mountain division.   His dramatic escape and his tearful reunion with Abrams are highlights of the story.  Abrams goes on to become a 4 star general, while Cohen goes back to civilian life in the clothing business and outdoor advertising.  Abrams becomes chairman of the Joint Chiefs, and top commander in Vietnam at the very end of that war.  Cohen and Abrams remain best buddies until the end when Abrams dies of cancer at age 60, a blow that Cohen grieves until his last days when he dies at age 89.

This 118 page screenplay is now being entered in screenwriting competitions, shown on the BlackList and to film professionals.  Here is the LOGLINE:

In WWII, Harold Cohen, a Jewish private in the US Army from South Carolina with bad eyesight develops quickly into a top combat infantry officer in Patton’s 4th Armored Division, and by fighting victoriously with Lt. Col. Creighton W. Abrams, Jr., America’s most inspirational tank commander, they become the team most highly feared by the Nazis, as well as life-long best buddies (adapted from Harold Cohen’s unpublished war memoir). 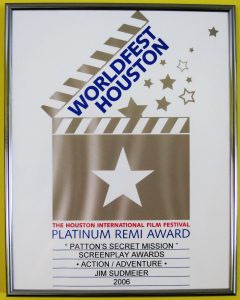 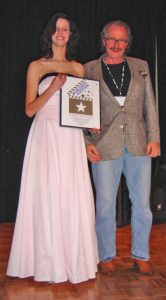 This screenplay won the Platinum REMI (first place) award at the Houston Film Festival, 2006. Up to now, Patton’s Secret Mission has escaped being made into what could be the best US tank movie of all time (see comparisons under “Best Tank Movie?” with Kelly’s Heroes, Patton, and Fury). Unlike KELLY’S HEROES and FURY, we start with a realistic mission and a plot so unbelievable that it needs no Hollywood embellishments. It is the little-known true story of General George S. Patton’s unauthorized, daring, nighttime raid by a 300-man armored Task Force led by Capt. Abe Baum 50 miles behind German lines to rescue Patton’s son-in-law from a POW camp in Hammelburg.  This high-stakes gamble is full of suspense, big egos, Nazi villainy, violent tank battles, and amazing twists and turns.

The audience will feel what it is like to live and fight in the noisy, claustrophobic, smelly, environment of the Sherman tank.  The roar of the engines makes a huge impression (see our website LINKS). We want our film to do for the Sherman tank what DAS BOOT did for the U-Boat. The raiders blow up trains, truck, barges—anything that moves and many things that don’t. Such is the training of the vaunted 4th Armored Division.  Bridges are blown up in their faces by the Germans, and they survive a blizzard of anti-tank fire in “Bazooka Alley.” The raiders are hit broadside as they approach Hammelburg like ducks in a shooting gallery by ten newly arrived tank destroyers. Why didn’t Patton arrange for air support?  The next day as they take their last stand they are crushed by a coordinated German assault and the raid degenerates into a panicky stampede.  Twenty-five of the raiders and an unknown number of prisoners are killed, 80% of the raiders become German prisoners, and the rest escape to freedom. The Nazi major who orchestrates the counterattack beats up Pvt. Solotoff, Capt. Baum’s captured interpreter, because he is Jewish and sentences him to death.
The dynamics of the 25 year old relationship between Eisenhower and Patton is the trigger for this story.  Patton’s romance with Jean Gordon, the 30 year old half-niece of his wife is portrayed. The final scene is a ticker tape parade through millions of people in Boston, where Patton gives a speech that gets him in trouble once again.  He flies off to Germany, never to see his family again.

Until this website the author has had little time or method to effectively publicize the script.  Those who have read it have given us consistently enthusiastic reviews.  That includes Martin Blumenson, principal Patton biographer; Karel Margry, Editor of “After the Battle” Magazine; Alan Tomkins, Academy Award-nominated Art Director for Saving Private Ryan and Band of Brothers; and highly decorated WWII veterans/authors such as Henry G. Phillips and Dr. John B. Shirley. Hammelburg raiders, including Bill Nutto and raid leader Abe Baum also made suggestions and stamped it with their imprimaturs.

PRODUCERS NOTE:  There is enough material in the script (with the help of scenes omitted due to space limitations) for a five part mini-series, building to a suspenseful conclusion. German co-authors Lt. Col. Peter Domes and M.Sgt Martin Heinlein are the world authorities on the Hammelburg raid.  They maintain a website on the topic (www.taskforcebaum.de), and have written a book on it in German (Alarm! Die Panzerspitze Kommt!!!) which will soon to be available in English (Task Force Baum: Behind Enemy Lines!). Domes and Heinlein might well be available as military advisors, and although there is no guarantee, their connection with the German Infantry School in Hammelburg might also facilitate shooting on location, use of a virtual village movie set on the army base, availability of extras, etc.